Bitcoin may be the alpha dog of crypto, but for many small retail investors these days, dogecoin and shiba inu are the pick of the litter.

Binance subsidiary WazirX, India’s largest cryptocurrency exchange, suffered outages as traders jumped into the fray, buying shiba inu and stressing out the platform’s servers to the point that trade executions were delayed this past Wednesday. Over half a billion dollars’ worth of trades were done on WazirX that day, the highest of any crypto exchange in India, CEO Nischal Shetty tweeted.

“It basically brought down our exchange,” Siddharth Menon, one of WazirX’s co-founders and its chief operating officer, said on CoinDesk TV’s “First Mover” program Thursday morning. “The kind of active numbers and the active users that we saw in the last 48 hours has actually shocked us. We were not ready for it. We were all ready for the bitcoin move, but we were never ready for shiba inu.”

Menon suspects that there is some amount of unit bias at play. That’s where a novice trader is prone to buy a lot of one kind of cryptocurrency because the price of one unit of it is relatively small compared with, say, bitcoin even though one can buy the same dollar amount in bitcoin as the low-priced coin.

For investors who are dipping their toes in the water with a relatively small amount of money, a low-priced coin can make one feel a little richer. For example, as of this writing, $620 buys 0.01 BTC. On the other hand, it buys about 10 million SHIB.

What the data show

And while some “smart money” is starting to appear to be trading shiba inu and dogecoin, “whales,” or large investors, remain in the more familiar seas of bitcoin and ether.

That can be seen in average trading volume. 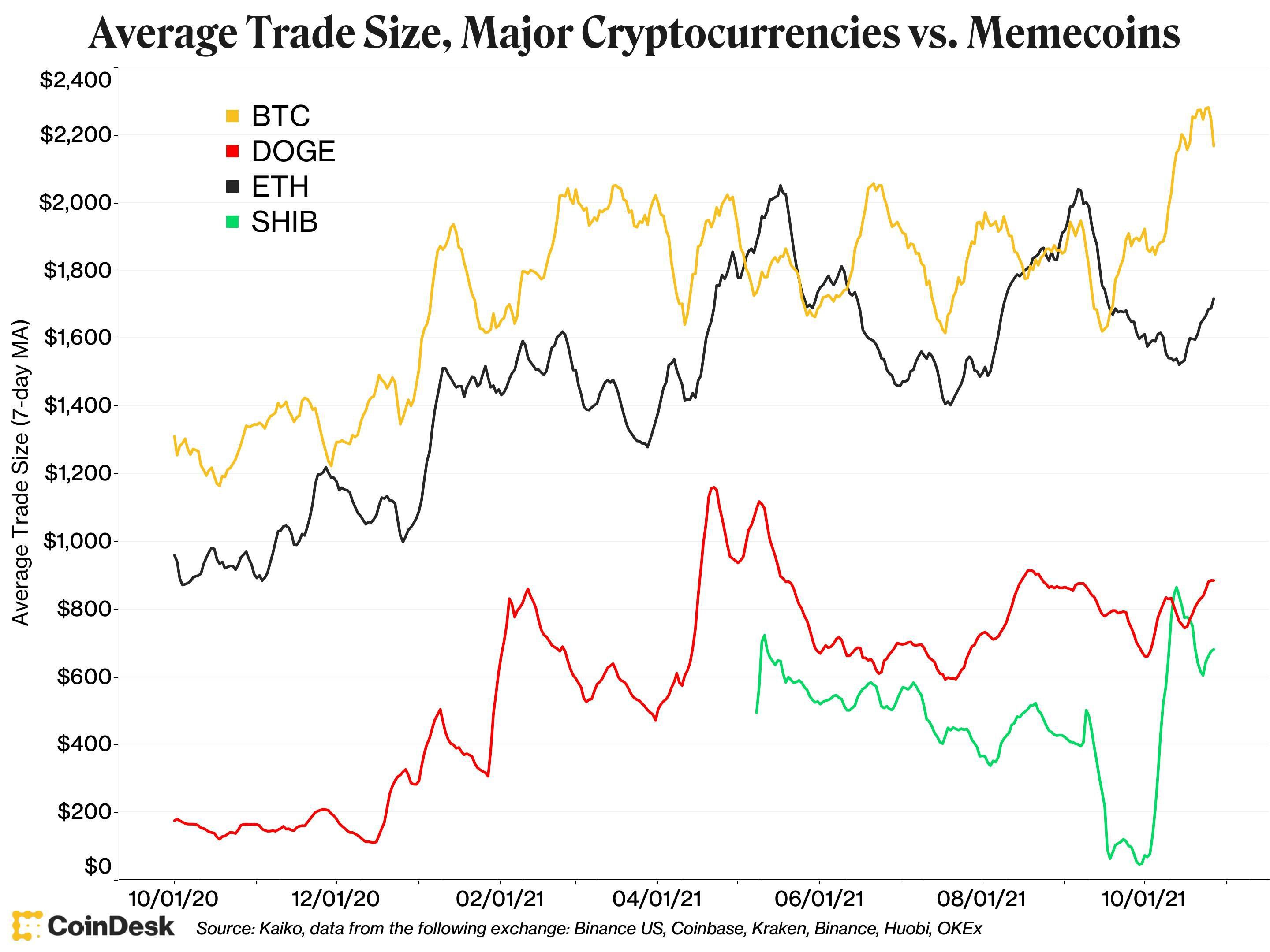 “This suggests price action is mostly retail-driven,” said Clara Medalie, strategic initiatives and research lead at digital asset data provider Kaiko, adding that on Binance, the average trade for bitcoin and ether is about $2,000. That figure is $1,200 for dogecoin and $900 for shibu inu.

“While average trade size isn’t a perfect gauge for institutional investment – most large traders break apart their orders into smaller sizes – we can still observe clear trends that correspond with waves of interest,” she said.

Yet the data shows that meme coins face their own cycle, Medalie noted.

“It is interesting to note that average trade size for nearly all assets has increased considerably since the start of the bull run last November,” Medalie said. “With meme tokens such as DOGE and SHIB, we can observe spikes during the initial fervor and then sharp declines once the excitement wears off.”

And all crypto moves at least somewhat together, including how large trades get. “We can also observe that bitcoin, ethereum and doge seem to have similar trend lines for average trade size, strongly correlated to mini-bull runs,” Medalie said, pointing out that trade sizes for all assets spiked right before the May crash.

Retail traders test out the experience of buying, holding and selling a small amount of cryptocurrency on new platforms by placing different types of orders and seeing how they get filled – or not. While holding $100 worth of bitcoin can be bought just the same, if not more easily, than $100 of dogecoin or shiba inu, it may take newbies a little bit of time to wrap their heads around that concept. What’s more, their experience with wild swings in meme coins will prime them for the volatile, though relatively “safer,” major cryptos like bitcoin or ether.

And when those novice traders finally realize that a single, low-priced meme coin will never surpass the price of bitcoin or ether as they currently trade (if shiba inu traded near bitcoin’s at around $62,000, its total market cap would be $36.5 quintillion, or 7,313 times the value of the earth’s estimated $5 quadrillion price tag), they may finally gain a little perspective, rid themselves of unit bias and use those meme coins instead to develop proper trader discipline.

Meme coins thus can be seen as the gateway for retail investors to become more experienced crypto traders.

An obedience school, if you will.