Over the past 10 days, the Bitcoin market has finally mounted a comeback. After falling as low as $6,800 near the start of the month, the leading cryptocurrency rocketed higher into the second week of January, reaching as high as $8,450 earlier this week.

The price has since retraced to $8,200, where bulls and bears seem to be fighting for control over the broader digital asset market.

Despite the uptrend that is forming, a team of analysts at JP Morgan, led by a managing director, is wary of downside risk for this nascent market, especially for Bitcoin.

Bloomberg on January 10th released an article outlining a research note penned by strategists at JP Morgan, one of the world’s largest financial institutions and one of the first banks to have formally delved into the crypto space with its own token based on a private version of Ethereum.

Per the note, one of JP Morgan’s managing director, Nikolaos Panigirtzoglou, noted that the cryptocurrency has some downside risk

He specifically looked to the fact that Bitcoin’s intrinsic value, calculated by the Wall Street giant by looking at the marginal cost of production of a single coin by weighing the price of computational power (via ASICs) and electricity costs, which shows that the fair price of BTC is still around $5,000:

The market price has declined by nearly 40% from its peak while the intrinsic value has risen by around 10%… The gap has not yet fully closed, suggesting some downside risk remains. 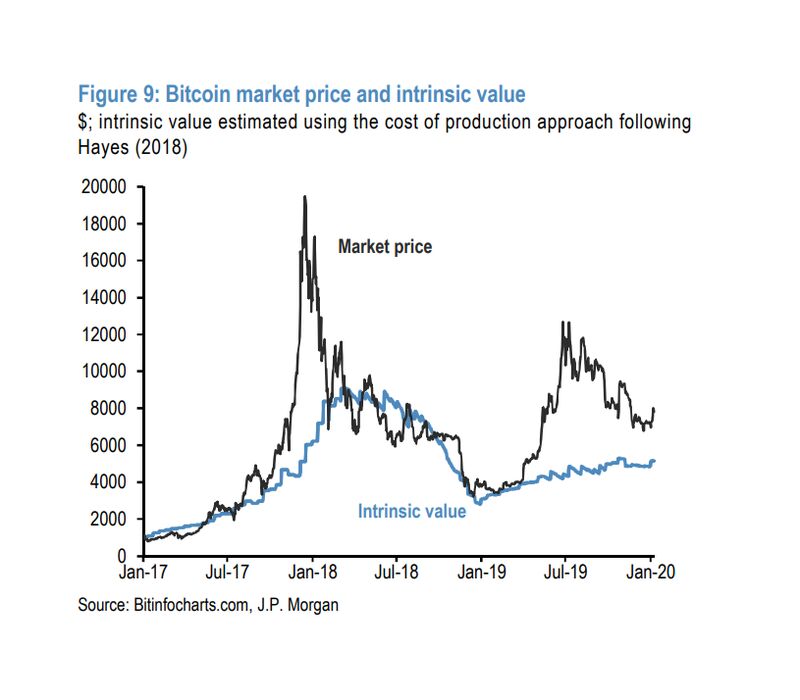 While JP Morgan may be bearish on Bitcoin for now, other analysts from prominent firms are getting optimistic.

Per previous reports from Blockonomi, senior commodities strategist Mike McGlone of  Bloomberg noted in an extensive report on the cryptocurrency market that Bitcoin is preparing to have a positive year.

McGlone wrote that he expects for Bitcoin to extend its gains back towards $14,000 sometime this year.

While he did admit that there is room for downside towards $6,000, the analyst noted that the trend is more positive than negative. McGlone specifically looked to his sentiment and the growing mass of evidence that suggests Bitcoin is becoming a safe-haven investment that is closely correlated with gold.

“The fact that a store-of-value asset with a fixed supply and increasing adoption is more likely to appreciate in price will keep Bitcoin supported in 2020… we expect movements in gold — which appears as a nascent bull market — to remain a proxy for Bitcoin,” he wrote, accentuating this narrative.

And it isn’t only this Bloomberg senior analyst that’s optimistic. Fundstrat Global Advisors, a top market strategy and sector research company based in New York, recently released its 2020 Crypto Outlook to its clients.

The entire report wasn’t publicly released, though the company released a sneak peek via its Twitter page, in which Fundstrat revealed three reasons why they expect to see Bitcoin appreciate by over 100% in 2020.

These three reasons are as follows: