Over the past few months, a trade war has been raging between the U.S. and China. Throughout this, Bitcoin (BTC) has managed to post stellar gains, rallying by some 100% since the latest leg of this dispute began.

While many believe that this is nothing but a coincidence, data is starting to show that the trade war has had a substantial effect on Bitcoin’s dynamic.

Bloomberg has reported that the 30-day inverse correlation between Bitcoin and the yuan has reached a record low, implying that the trade war has forced Chinese investors to adopt BTC. 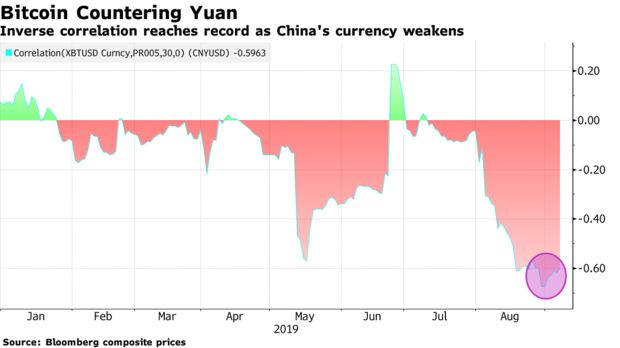 Speaking to Bloomberg, Dr. Garrick Hileman, the head of Blockchain.com’s research division, explained that this can be verified by the fact that “people in Asia were paying more for Bitcoin than elsewhere when the yuan fell”, looking to certain premiums on platforms like Huobi.

Of course, there were some occasions where a negative premium (a discount, to be accurate) was observed in China. Yet Hileman asserts that the negative correlation has much to do with the trade war.

If he’s correct, the negative correlation corroborates the whole idea that Bitcoin is a form of “digital gold”, in that it has similar characteristics and price patterns to the precious metal, yet it exists in a digital setting.

Not a Safe Haven?

Despite the growing correlation, some have been quick to deny that Bitcoin is acting as a safe haven in the raging trade spat.

In a tweet published in the wake of a recent surge in BTC and simultaneous collapse in the Yuan, Peter Schiff wrote that the recent rally isn’t a sign that the cryptocurrency is a beneficiary of “safe haven buying [that is] similar to gold”. Instead, the gold proponent argued that Bitcoin is being bought up by “speculators” betting that investors are searching for a store of value.

This comes shortly after he claimed that Bitcoin’s inability to maintain gains in this tumultuous macroeconomic environment is a sign that it has “failed the safe haven test”. As reported by NewsBTC at the time, the fact that Bitcoin failed to hold its gains during a trade war development doesn’t bode well for advocates of BTC being digital gold.

Related Reading: Bitcoin Could Follow Gold Fractal With 44% Drop to Under $7,000

Of course, the high volume of Tether (USDT) trades — which are widely believed to be completed by Chinese traders — tells a different story. But Schiff has been quite staunch in his belief.