Bloomberg says Ethereum is losing steam and Vitalik affirm their findings. But this is expected. Competition is heating up, and more are launching faster and scalable platforms. In the meantime, Ethereum (ETH) is lagging and poised to close above $170 for the first time since Nov 2018.

Despite criticism, Ethereum is the market leader and the pioneer smart contract platform. It was the first project to introduce smart contract capability, is permissionless and popular with developers. Since Homestead, progress is positive, and the evolution now is towards proof-of-stake in Serenity. There is also Ethereum 2.0, and if anything, the community is undoubtedly satisfied with what lies ahead.

However, in their progress–and in a bid to cement their position as a market leader in smart contracting, similar projects cropped up. Projects as DFinity, EOS, and Tron for example promise to tokenize assets but do so with better throughput and scalable platform. Competition is so stiff that Vitalik admits that they are slipping. His honest overview is visible when China’s CCID ranked the project as third, behind EOS and Tron.

But there could be no better comparison than organic findings from Google Trend. In a tweet, a user, Misha notes that Ethereum’s competitor Tron is on demand thanks to BitTorrent and its successful ICO which in turn is driving the asset trading volume at the expense of Ethereum. 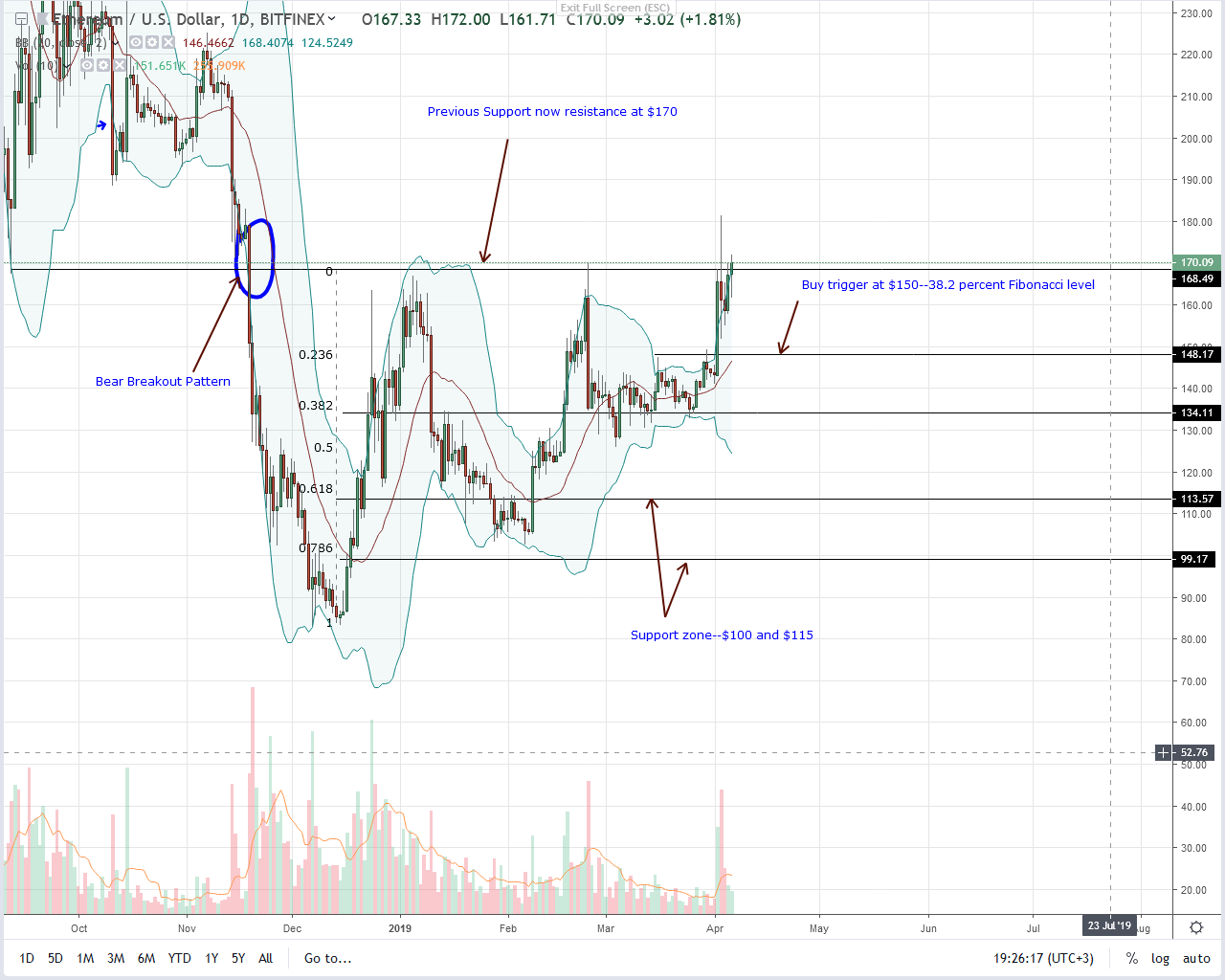 On-chain development is indeed positive, and at second, Ethereum (ETH) is underperforming. The second most valuable coin is up 16.9 percent in the last week and a massive 2.5 percent in the previous day meaning bulls are back as ETH benefit from Bitcoin flow juices.

All the same, ETH is lagging, and unlike other assets as Bitcoin or TRX for example, the coin is struggling and yet to reverse Q4 losses. That means ETH is trading below $170 despite underlying momentum being high. It’s easy to see. ETH bull bars are banding along the upper BB, and as bulls step up, the upper and middle BB are diverging.

In line with our last ETH/USD trade plan, aggressive traders can load up on dips in smaller time frames, but it is only until after bulls close above $170 that risk-averse, conservative traders can load up with targets at $250. By doing so, ETH will be free, closing above a four-month resistance trend line and resulting tailwind would easily propel prices towards $250.

Buy momentum is high and we expect volumes to surge once ETH bulls close above $170 in a breakout pattern. Ideally, any close above $170 must be with high transaction volumes above Feb 24—880k exceeding Apr 2—575k.