Ellcrys is getting ready for its pre-IEO, and that could be a great thing for developers everywhere.

The idea that drives Ellcrys is simple: allow developers everywhere to own, collaborate and build the next generation of software without having to deal with a centralized authority that could stifle innovation.

Let’s be honest about the world we live in. There are today, and always have been, powerful parties that want to control how technology evolved and who has access to information.

The internet has grown out of open source information sharing architecture, but there are still many ways that centralized authority can influence how information is shared on the internet.

When it comes to software development, control over information has far-reaching consequences.

Blockchain is already making a big difference in numerous global industries. Financial firms have rushed to roll out blockchain platforms because of the efficacy and transparency that are inherent to blockchain architecture.

Ellcrys sees the potential for blockchain to be applied to what is arguably the most powerful area of human technology: software development. The platform that Ellcrys developed has to important aspects that could shift how open source software development takes place.

The first is ownership. Ellcrys allows software developers to establish ownership over code, and share it among a group via smart contracts.

Instead of having to incorporate and engage the legal system in multiple jurisdictions, Ellcrys lets independent developers work together across the globe, and ensures that the ownership of their work is secure.

The second aspect of Ellcrys’ platform that could change the development game is that it allows git hosting on a network that is designed to resist censorship. The network also offers the potential for high-availability and freedom from powerful parties with divergent interests.

Microsoft hasn’t taken over the consumer computer market because it has the best OS. The company has become a powerhouse because it was able to secure an early advantage in the PC market, and has been terrible to open source developers ever since.

The next generation of computing could fall into the same trap, but the platform that Ellcrys designed is the perfect solution to that potential pitfall.

Ellcrys is opening up its blockchain to investors on July 1st, with a pre-IEO. 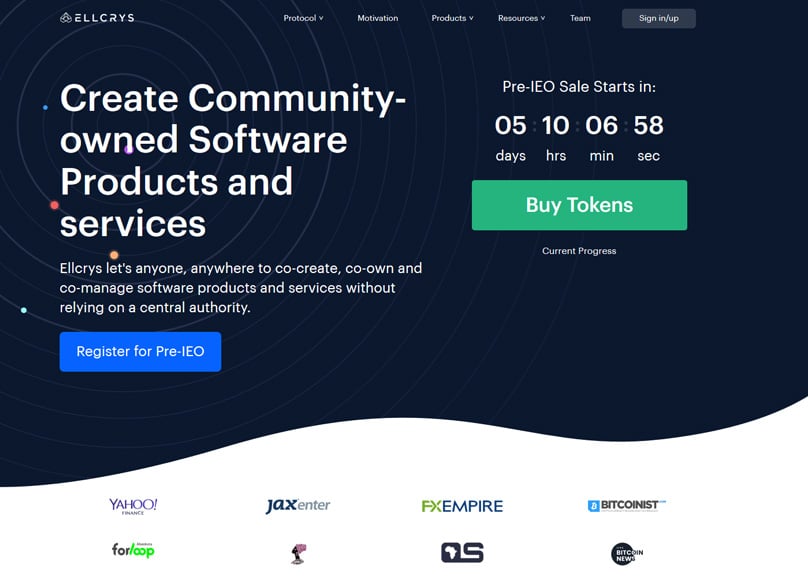 If you are interested in buying tokens, the pre-IEO details can be found here.

Ellcrys came up with PeopleMint, which is how its tokens will be created. PeopleMint is an interesting idea that will help to democratize the creation of ELL coins in a way that previous blockchains can’t match.

A platform like Bitcoin was designed to be free from centralized authority, but it created a network that rewards a few major players.

Fewer people can afford to run the network, which could mean big problems for the blockchain down the road. If and when mining coins becomes cost prohibitive, the entire blockchain (and everything on it) will become worthless as no one will want to operate it.

The process of creating new tokens with PeopleMint starts with bank notes (aka paper money). A video is made by a real person with a bank note, and that will become the basis of new ELL tokens. The process involves a substantial amount of oversight and is fully explained in Ellcrys’ Whitepaper.

The bottom line is that Ellcrys has designed a token issuance system that won’t support a market where a few token holders control the entire network, and new people can always enter the token creation process.

Ellcrys recognized that the consensus system the original Bitcoin blockchain used simply isn’t going to scale up to the needs of a growing global online development community.

The idea that an entire blockchain has to be hosted by every node isn’t inherently bad, but it does create an impediment for growth if the blockchain becomes sufficiently large. Limits to realistic growth is one of the reasons why Ellcrys chose to employ a hybrid consensus system similar to what drives Bitcoin-NG. 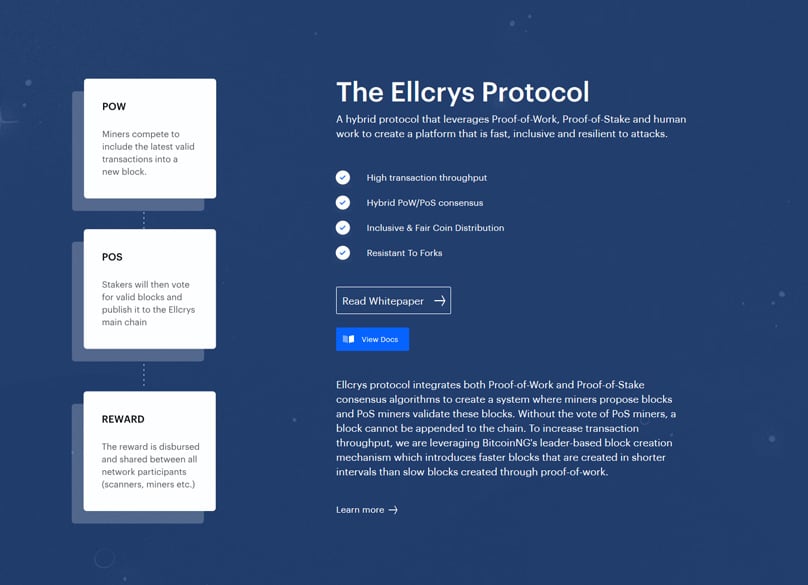 Bitcoin-NG uses a verification process that allows the network to continue functioning, even when it is looking for a new leader for the ‘epoch’. The original Bitcoin blockchain can’t match this, as it is incapable of processing transactions during the 10-minute block interval.

The Ellcrys consensus mechanism is a uses both Proof-of-Work and Proof-of-Stake. The model that Ellcrys chose is based on the ideas that were described in the Proof of Activity protocol by Iddo Bentov et al.

Bentov discussed a process which extends the Nakamoto Proof of Work via Proof of Stake to increase the security of the network, while at the same time reducing the dependence on miners as the only contributor to network security. Ellcrys sees this innovation as valuable and built its consensus system to work along these lines.

Ownership is one of the most important ideas in any economic system. There is a good reason why people tend to work harder when they have a share of a company or product.

If we consider what Microsoft actually is, at its most basic level, it is easy to see how powerful Ellcrys’ platform could become.

Bill Gates was able to build one of the largest fortunes in human history by getting his software included in PCs at a time when there were few competitors. The nature of Microsoft as a company is simply a group of software developers who are able to work together and be rewarded for their efforts.

In addition to allowing software developers to work together, Ellcrys designed a platform that helps keep code free from censorship, even if powerful entities oppose what the code is capable of doing. Sometimes new ideas can harm the existing power structure, even if they would benefit the world’s population as a whole.

We have seen how much blow-back cryptocurrency created at the highest levels of banking. There are other ideas, especially in the world of cryptography, which could be even more disruptive.

Ellcrys is Helping to Build The Future

A company like Intel or Foxconn has to make huge investments in factories, but software companies specialize in human capital. With the ability for open economic collaboration that Ellcrys’ platform gives developers, it is conceivable that the next generation in software could be totally decentralized.

Ellcrys has been working on its platform for years, and it appears that it has made solid progress. It will be interesting to see how the platform develops as more investment money comes in, and how successful it is in attracting software developers to a robust, decentralized platform.