Home crypto trading Cryptocurrency Trading: What is the The MACD Indicator?

The volatile crypto world is a playground for learning and using different technical analysis indicators. Perhaps the most helpful variety for the newcomer is lagging indicators, or indicators based on past price movements.

These give a sense of history to your analysis and point directly to emerging trends in both bull and bear markets. We’re going to take a brief look at one of the more information-dense indicators that can be used to predict future price movement – the moving average convergence/divergence oscillator, or MACD indicator.

This indicator can be used in conjunction with other confirmation methods to predict future bull and bear runs using historical information. 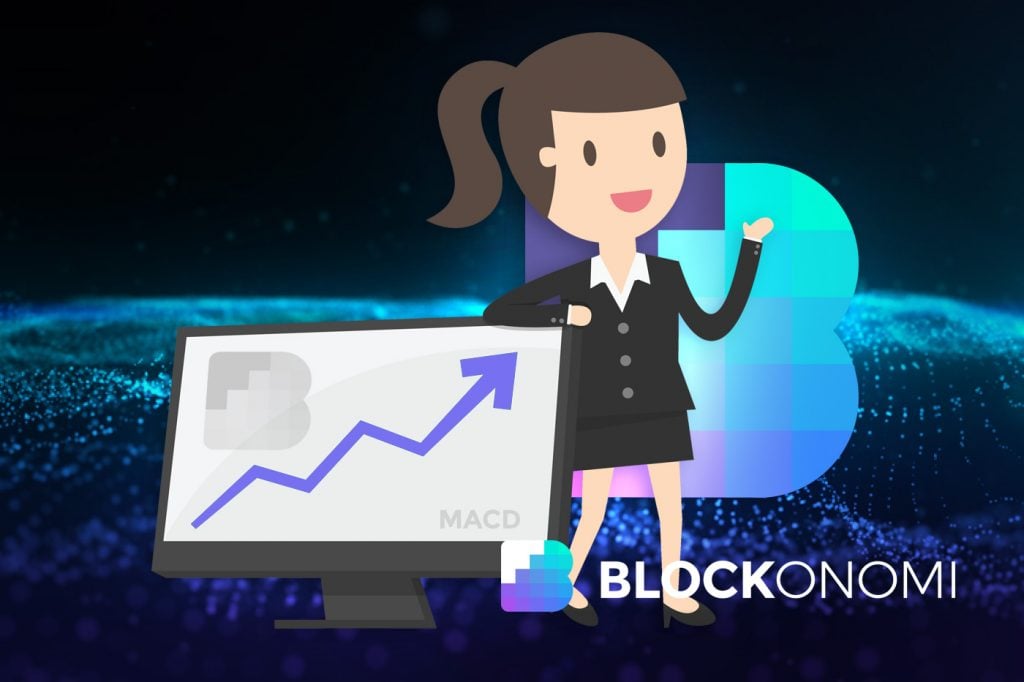 Components of the MACD

You might also find MACD charts that use a 12-day exponential moving average and a 9-day average of that line, called the MACD line and the signal line, respectively. In either case, the charts are read in the same way. We’re going to focus on the 12-day, 26-day version for simplicity. 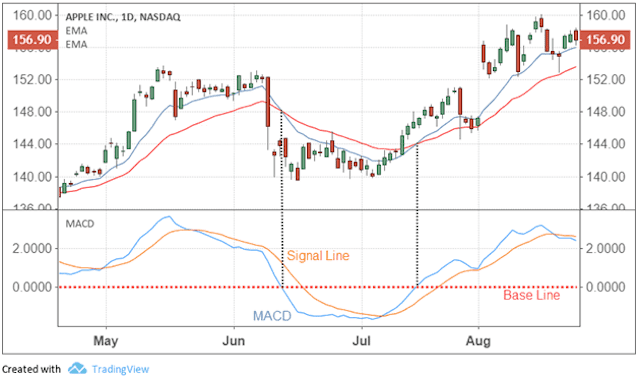 As these moving averages flow along the chart, distance will develop between their respective peaks and troughs. They might cross over each other, and they might follow in parallel.

The bars at the bottom of a MACD graphically represent the distance between the lines and their relative direction. Bars pointing upward indicate that the short-term moving average is above the medium-term moving average and vice versa for downward-pointing bars. 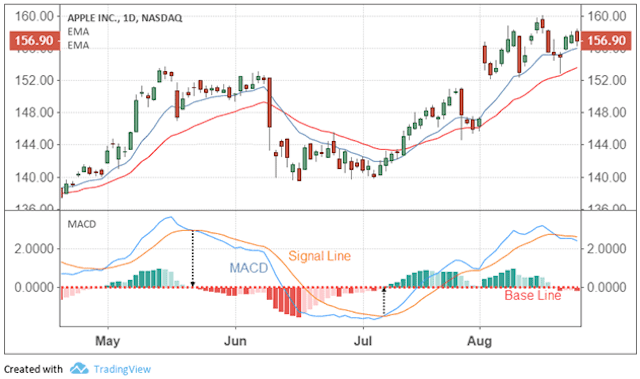 Contained within these three components are all the information you need to confirm a bullish or bearish run in the near future.

The interesting part comes in when you consider the distance and direction of the lines from each other.

It’s worth noting that this is only a snapshot of the market as it immediately stands, and the prices can’t be extrapolated long term. For example, a wide divergence in an upward direction between short- and medium-term prices might mean that the market is on its way to being overbought. Conversely, if the lines are long and point downward, you can infer that the market is in a downward trend but might very well be on the way to being oversold.

In both scenarios, what you’re looking for is a crossover of the lines. This indicates a trend reversal and can be used to plan future trades. 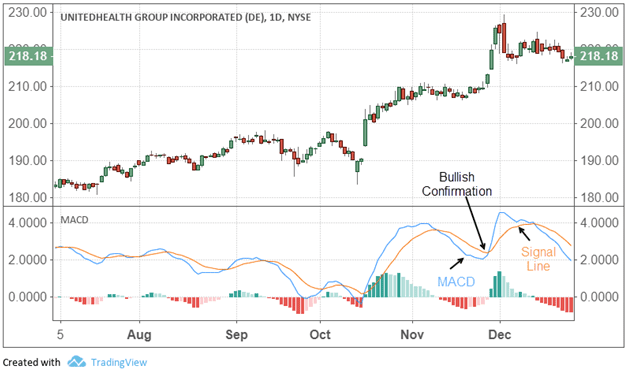 As is always the case with lagging indicators, it’s always a good idea to doublecheck your work with a different technical analysis indicator to confirm the overall trend. Moving averages alone shouldn’t be used to forge pricing positions or buy-in levels.

Limitations of the MACD Indicator

The first and most obvious drawback of the MACD indicator is that the settings can differ from user to user. We’ve already discussed the 12- and 26-day moving average version vs. the 12- and 9-day version. These differences can mean that two different MACD users might get different readings from the same data, depending on which version they choose to use.

The timeline of the chart may also muddle the data. Most traders prefer to use the MACD indicator on a daily price chart. It’s helpful, however, to confirm trends across wider timelines to avoid noise in the short-term numbers. Always remember that when you’re dealing with moving averages, you’re already dealing with a time component that was designed to smooth out choppy day-to-day pricing information. Be careful that you don’t smooth your lines out to the point of being uninformative.

Since the MACD is a lagging indicator, it can be somewhat slow to register sudden shifts in the market. This is particularly pertinent to the wild and woolly world of cryptocurrency, where major swings can happen in a matter of hours or minutes. Relying solely on an MACD indicator analysis will leave you a step behind the market itself.

Finally, an MACD might produce a false reversal signal if the trader acts too quickly. Markets frequently tiptoe along the reversal line, vacillating back and forth before making the actual plunge. Because the MACD is a lagging indicator, you run the risk of jumping the gun, so to speak, on a reversal before that reversal really takes hold.

For example, if the MACD shows a crossover indicating a coming bull run and you act on it too quickly, you might overextend yourself before the market truly begins the run. Again, it’s helpful to confirm price moves and reversals with several different indicators before actually placing trades.

We have also created a number of guides about Technical Analysis :

Another Tool in the Box

Keep an eye on the histogram at the bottom of the chart for overbought and oversold indicators and pay special attention to crossovers. Also, keep in mind that you’re working with essentially old data.

It pays to doublecheck your work with a variety of indicators to confirm that the price action you’re seeing on the MACD is actually taking place.

The post Cryptocurrency Trading: What is the The MACD Indicator? appeared first on Blockonomi.

Bitcoin Surges Over $6,700 as World Economy Continues to Weaken

Economist Suggests Bitcoin’s Price Would Skyrocket If It Scaled