From yesterday’s low at around $121B the evaluation of the cryptocurrency market cap has increased today by 11 billion dollars measured to the current levels.

As you can see from the global chart the evaluation has broken out from the major resistance and is currently in an upward trajectory. Consequently, the market is in green with an average percentage of increase ranging around 9%. The biggest gainers are in double digits and the most notable increase among top 100 coins is Bitcoin Private with an increase of 40.59% in the last 24 hours. 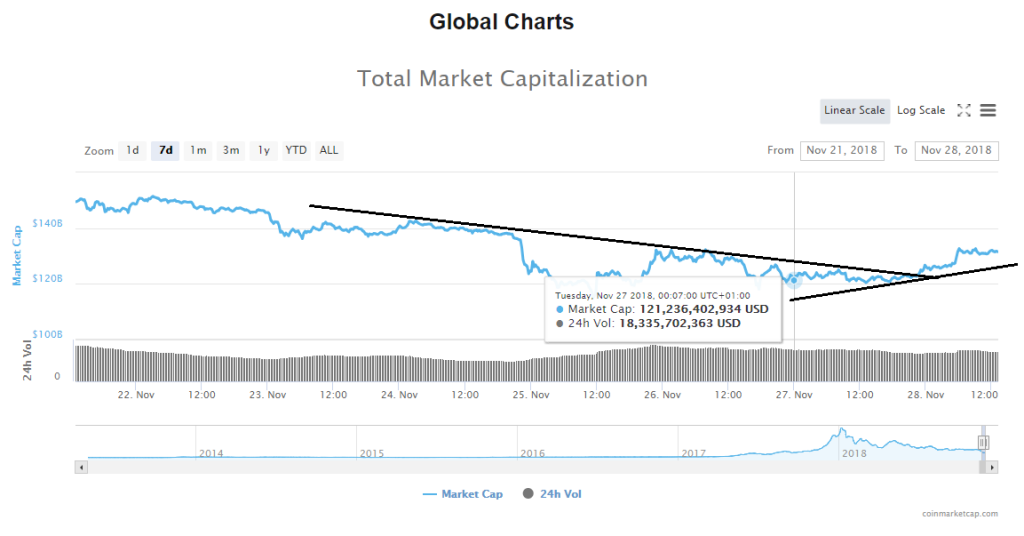 Meanwhile, Bitcoin’s market dominance has stayed around the same levels which indicates that the new capital has spread into the market widely as to include the altcoins who previously saw a decrease. 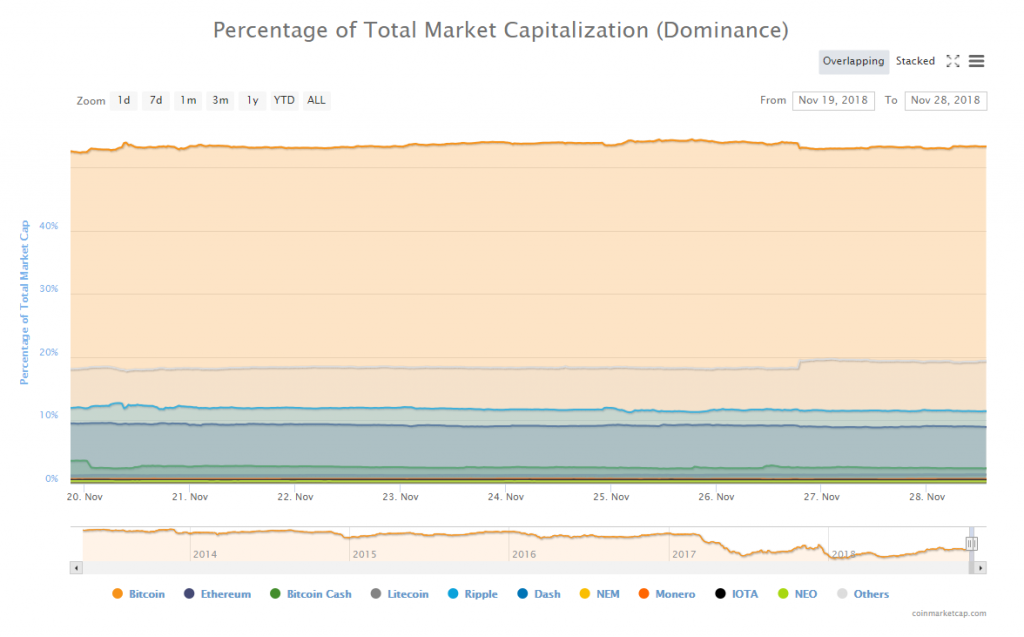 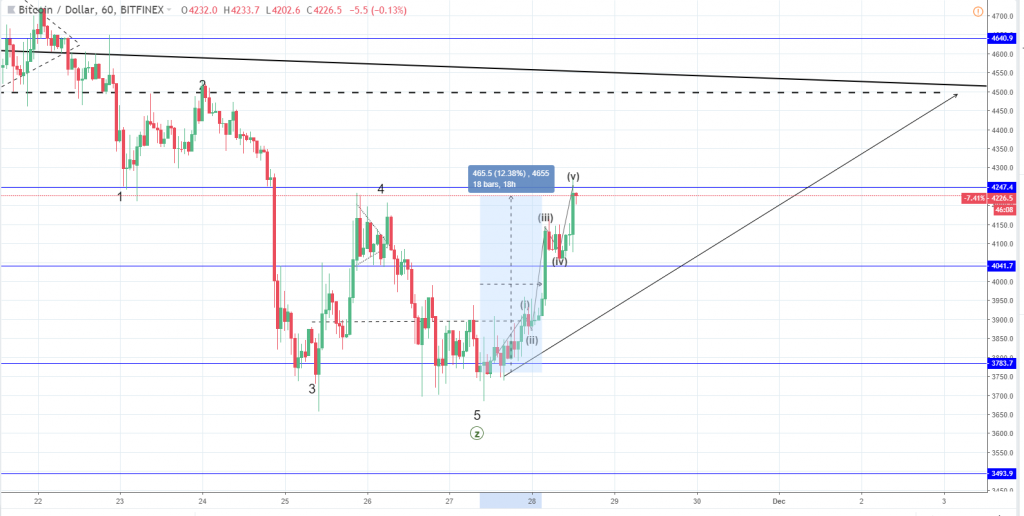 Looking at the hourly chart you can see that the price has indeed found its bottom yesterday on the third interaction with the horizontal support level at $3783.7. Since the final corrective Z wave has ended an impulsive 12345 in the upward direction begun and judging by the sub-waves it has a bit more to go potentially for another interaction with the horizontal resistance level at $4247 before undergoing a small correction.

In the upcoming period, I would be expecting that the price pulls back a bit at first and then continue going upward to retest the descending channels support levels for resistance.

From yesterday’s low at $267.49 the price of Bitcoin Cash has increased by 12.97% as the cryptocurrency is currently being traded at $303. 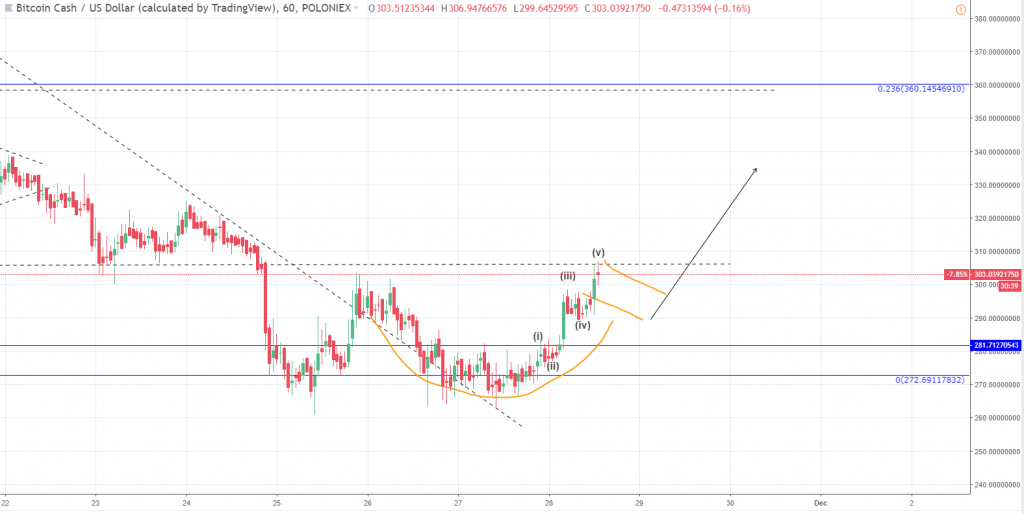 Looking at the hourly chart you can see a similar upward structure like in the case of Bitcoin. At the moment we can see that the price has reached the horizontal resistance line at $ 306.3 and the interaction with it resulted with a small decrease for now. As you can see the price action has formed a U shape which indicates a bottom and considering the horizontal level will serve as resistance we are now likely going to see a retracement which would be in combination with the U shape bottom a cup and handle pattern.

After a pullback, I would be expecting that the price continues in an upward trajectory but we are yet to see how high will this recovery go. 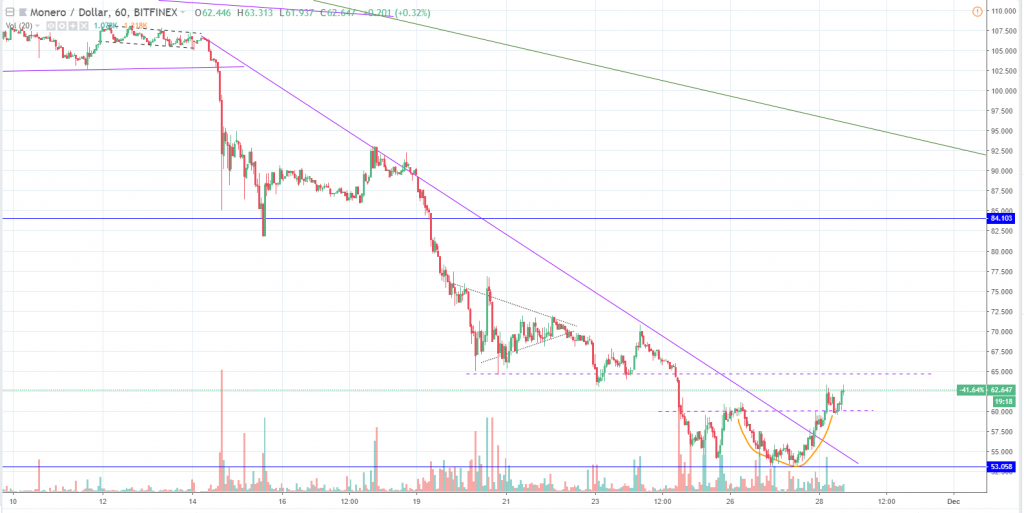 On the hourly chart, you can see that the price has broken the major resistance line much like it did on the charts of two major cryptos previously analyzed. Currently, the price is in an upward trajectory since a small pullback which is what I am expecting to see now for the price of Bitcoin Cash. The next horizontal resistance level in line is at the prior range support which is at $64.645. The price could stop increasing here because as you can see by the wick from the upside the selling pressure has already being experienced.

Monero is in the buy zone.

The cryptocurrency market has started to recover since the evaluation has been continually decreasing from 14th of November when it was at $209,9B at its open until Sunday when it reached $115,113,000,000 at its lowest. 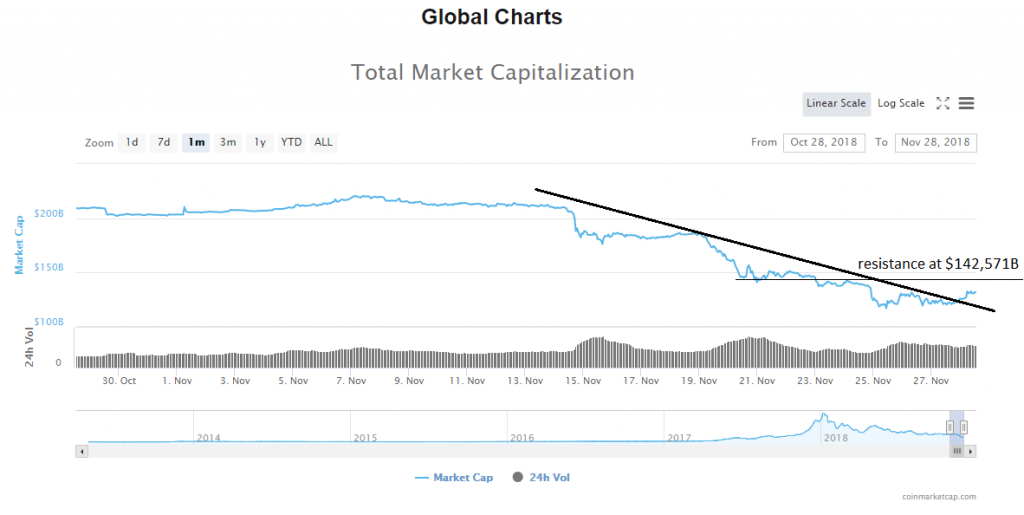 Looking at the global chart you can see the similarities in the structure with all the major cryptos as well as the minor once. It looks like the down move has ended and that the recovery has started. First major resistance the evaluation has encountered and is currently struggling to pass is the prior lower high level. I believe that the evaluation will pullback to retest downtrend’s resistance line for support from which an increase is to be made to the next horizontal resistance level which is at around $142,571B and is the support from the consolidation range.

After the interaction with the mentioned level we will see and evaluate the potential behind the upward move.

Altcoins on Track to Plunge By 10%, Yet This Crypto Could Rally Higher

XRP Analyst Suggests IPO Could Be Game-Changing for Ripple: Here’s How