On yesterday’s open the evaluation of the cryptocurrency market cap was at $121,9B. From there it fell to $120,949B at its lowest point yesterday but since went on for another increase as it came up to $123B at today’s open.

Zooming out further on the global chart you can see that the evaluation has interacted with the horizontal support level at around $120B which was recently broken but the evaluation quickly went above it again and was retesting its support since. The evaluation has found resistance at the symmetrical triangle’s resistance line so it started bouncing inside the upper midrange of the triangle. 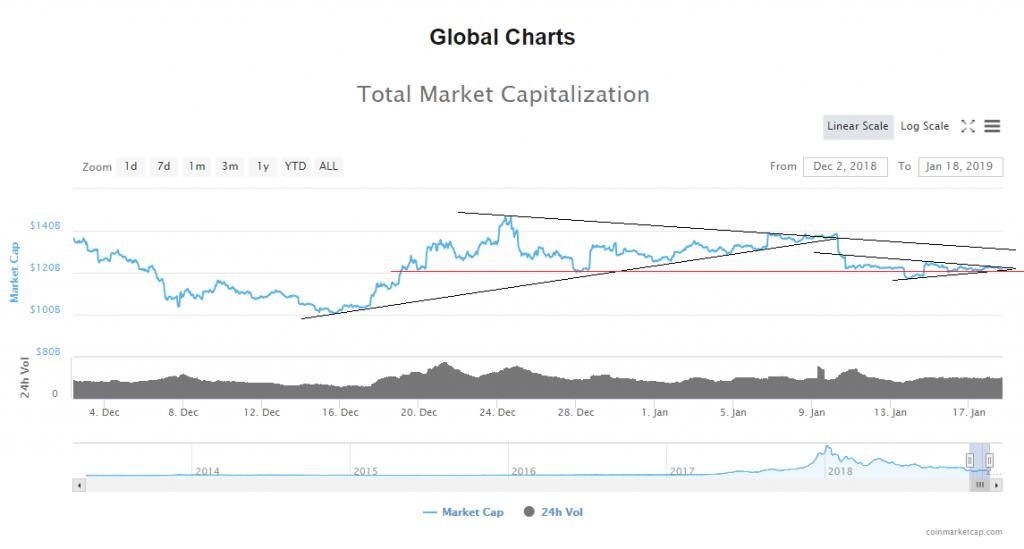 The evaluation previously broke to the downside from the established uptrend support line when it came up at first like it’s going to break the downtrend resistance line, but the attempt has resulted in a fake out with the evaluation heading strongly to the downside.

We are soon going to see a move with strong momentum behind it as a breakout from the current triangle looks close. If the evaluation goes to the upside I would expect to see the interaction with the previous downtrend resistance line which would bring the evaluation to around $131B. If it breaks down to the downside it will be a continuation of the previous move and would be much larger and could push the evaluation back to $104B.

Bitcoin’s market dominance has been increasing following the decrease that we have seen and has bounced off of its horizontal support level and is likely now headed towards its upper level of the current range in which it is in. 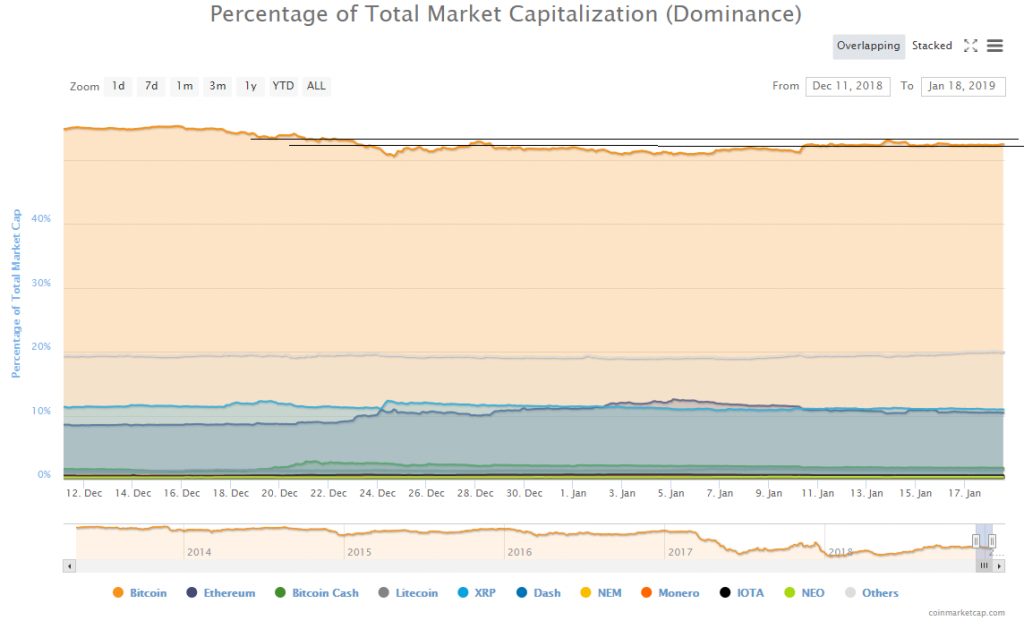 The market is mixed in color today with an average percentage of change in the last 24 hours among top 100 coins ranging around 2%.

From yesterday’s low at $3638, the price of Bitcoin increased by 2.36% until today’s open when it was at $3723. From today’s open the price has declined again to $3666 from where it started moving upward again and is currently sitting at $3689.

Looking at the hourly chart you can see that the price of Bitcoin reached its minor horizontal resistance level (purple interrupted line), similar to that of the first X wave which also indicates that the current move is going to end similarly and is most likely the second wave X. The price found support today on the 0.382 Fibonacci level and has bounced off of it nicely, forming a higher low still indicating bullish momentum even though the price previously bearly exceeded the previous high and was stopped at its vicinity again.

Now that the price is in an upward trajectory I would be expecting a breakout to the upside but potentially with another retest of support at the 0.382 Fibonacci level or going even a bit further below it, before the increase is made and is likely afterward heading toward the 0.5 Fibonacci level at least if this scenario is valid.

Zooming into the 15 min chart I have counted the sub-waves of this last corrective structure and as you can see from the chart below if my count is correct the current move to the upside is the X wave from the third Minuette correction, so I would be expecting the start of the Minuette downtrend any time soon.

After the move has ended then a move to the upside is expected as another increase should develop like the one seen on Monday.

Bitcoin is in the sell zone, as indicated by the hourly market technicals.

The overall sentiment for the crypto market looks still bearish even though some minor increase is expected it is only correctional in a sense that further downside is expected from there.