The cryptocurrency market has been moving sideways from yesterday, hovering around the same levels around $140B level going above and below it.

Looking at the global chart you can see that the evaluation came back to the levels of yesterday’s low at around $139,6 billion levels but started increasing again and is currently slightly above the midpoint of the descending horizontal range. 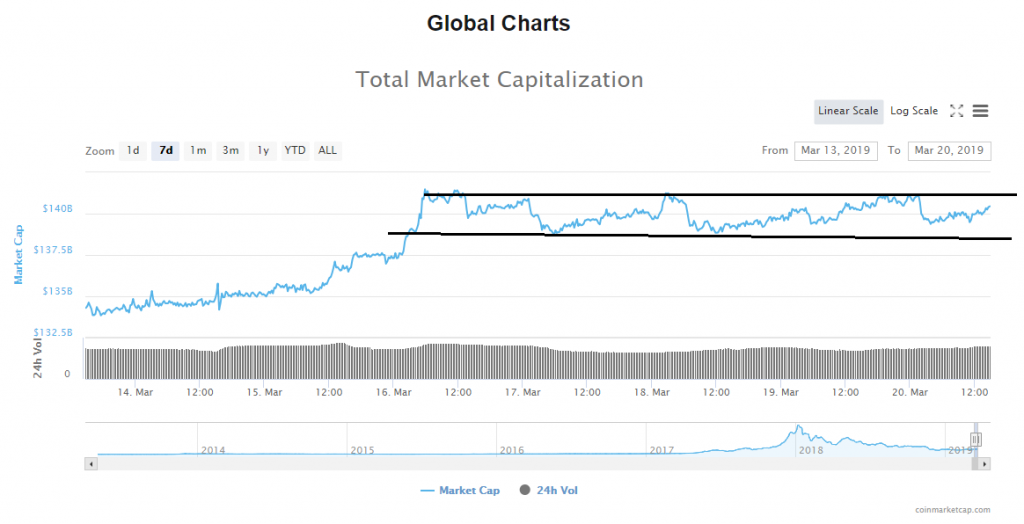 The market is in red today with an insignificant percentage of change in the last 24 hours as an average it is ranging around 0.8%. The biggest movers today are in green with double-digit gains like Tezos with an increase of over 21.35%, Golem by over 19% and Huobi Token with 15.18%.

Bitcoin’s market dominance has been hovering around the same levels as well and is currently sitting at 50.8%.

From yesterday’s low at $4016, the price of Bitcoin increased by 1.45% today and is currently sitting at around $4100 level which serves as a minor resistance point.

On the hourly chart, you can see that the price of Bitcoin broke out from the descending triangle on the upside and has also broken the falling wedge resistance line which was later retested today for support when a large red hourly candle pushed the price for interaction with the level after which an equal green candle recovered the price to the same levels which indicated that the support is there.

The price is currently in a tight spot as the minor horizontal resistance level from the previous correction is above so it is struggling to keep up the upward momentum.

This newly formed cluster would most likely result in a breakout to the upside as this is most likely the start of the 5th Minute wave out of the five-wave move to the upside in which case I would expect to see it end at the ascending triangle’s resistance line at around $4218.

On the hourly chart below you can see that the price of Tezos came up to the median line of the resistance zone above the previous structure where it has encountered strong resistance which is why we are seeing the last couple of hourly candles being red with wicks from the downside, suggesting that the buyers are pushing the price but the sellers are stronger at this point.

The price broke out form the symmetrical triangle in which it was correcting but still hasn’t exceeded the prior high level and is around its vicinity at the moment. As the price is still in an upward trajectory and has entered the territory of the resistance zone we could see another increase to its upper level which would bring the price of Tezos at around $0.637.

The shown chart pattern is similar to the one that can be seen on the charts of the major cryptos which could indicate what would come next but since this upswing is most likely the third wave from the correction in a downtrend we are to see the further downside when it ends.

Tezos is in the buy zone.

Looking at the 4-hour chart you can see that the price of Golem increased to its first horizontal resistance point which was the levels of previous sideways correction upper range level and has managed to come slightly above it but is now back around its vicinity potentially retesting the level for support. If the uptrend is to continue the support must be present at those level and I believe that it will considering the momentum shown.

We can see that a similar structure slightly larger played out before this current one which could be viewed as a fractal. This could indicate that after the price reaches the levels of the first high after a downfall was made at around $0.1035 we could expect to see another downfall like we did the last time. This would be the interaction with the horizontal resistance line ending as a rejection or even a slight peak above it, entering the sellers’ territory.

Golem is in the buy zone, as indicated by the hourly chart technical indicators.

As the market started moving slightly to the upside and as shown on the charts of some of the major cryptocurrencies slightly above their resistance points, it looks like we are to see another increase as the prices still have more room to go for interaction with their most upper resistance points.