Once again, Bitcoin (BTC) has started to pick up steam, with the cryptocurrency rallying to a nearly two-month high of $8,580 just minutes ago as of the time of writing this.

This sudden 6% surge from $8,050 has since retraced slightly, with BTC now trading at $8,500 flat, analysts are becoming convinced that digital assets are ready to move out of the bear market it has been trading in for the past six months.

Bitcoin started Monday with traders fearing the worst: after the week prior’s surge to $8,450, the cryptocurrency had retraced as low as $7,700, leading some to suggest that the move was a short squeeze — just a temporary blip of bullish price action before an inevitable return to the lows.

But, at around 0:30 UTC on Tuesday, the cryptocurrency suddenly broke higher, gaining 5% in an hour or two. After consolidating at $8,400 for two hours, BTC gained another 2% around 4:00 UTC. Per a number of analysts, this move allowed Bitcoin to print an array of bullish signals.

Per Joe McCann, a prominent cryptocurrency trader and Cloud and AI specialist at Microsoft, the moving average crossover caused by the breakout may be setting Bitcoin up for a surge into the high $8,000s. He indicated this position by posting the chart below via his Telegram channel. 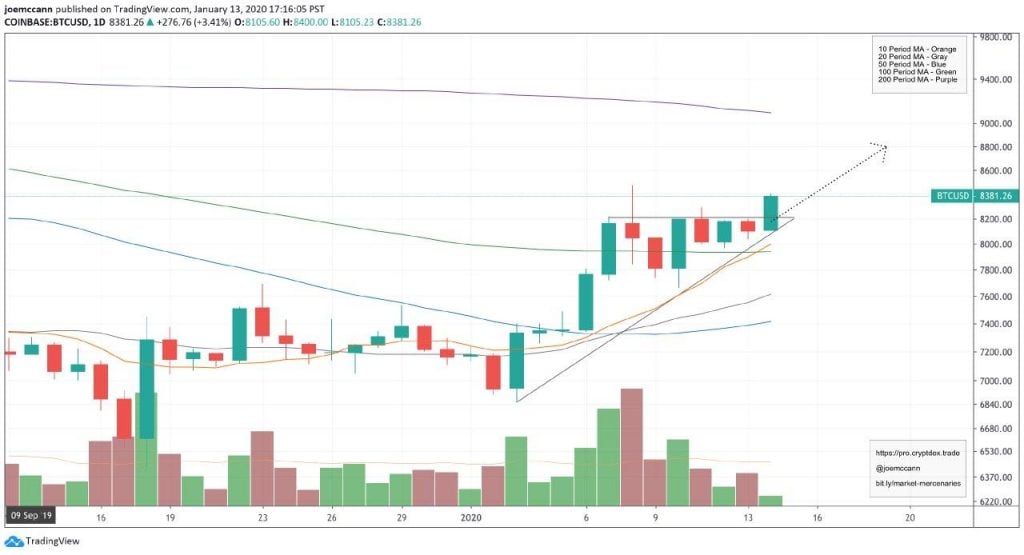 Full-time trader Cold Blooded Shiller noted that this breakout allowed Bitcoin to break above a bull pennant that had been forming over the past few days.

This breakout from this classical chart pattern, due to textbook technical analysis, suggests BTC will rally towards $8,750 and $8,800 in the coming days.

Bitcoin’s breakout comes on a rather auspicious day for the cryptocurrency market: on January 13th, the CME, one of the first regulated financial markets to offer Bitcoin-related products, launched its options derivatives for the leading cryptocurrency.

Although these options are cash-settled, giving futures traders a chance to hedge risk and create more profit opportunities in the Bitcoin market, it marks a sign of institutions continuing to delve into this budding market.

Executives such as Changpeng “CZ” Zhao, chief executive of Binance, and Galaxy Digital’s Mike Novogratz have both said that institutional involvement in Bitcoin is a bullish sign that can help catalyze long-term growth in the industry.

This breakout comes hot on the heels of reports from prominent financial analysts that Bitcoin will see an extremely positive 2020.

In a segment in a 2020 Crypto Outlook from Fundstrat Global Advisors, a top market strategy and sector research company based in New York, analysts said that they expect for BTC to see over 100% appreciation in the coming 12 months.

Bloomberg analyst Mike McGlone echoed the optimism, expressing in a report that due to macro and geopolitical factors, gold could begin to rally, thus benefiting BTC.

McGlone’s idea being that Bitcoin is becoming a digital gold, meaning that it should rally in tandem with the precious metal.

Altcoins on Track to Plunge By 10%, Yet This Crypto Could Rally Higher

XRP Analyst Suggests IPO Could Be Game-Changing for Ripple: Here’s How