Home Coins Bitcoin Bitcoin Price Rises Over the Weekend, What’s Next for BTC?

On Friday, the evaluation of the cryptocurrency market cap has been sitting around $171B and from there continued its upward movement until today when it reached $185,834,567,541 at its highest point.

The evaluation started moving to the downside from there and came down to $178,610,692,940 on today’s low but is currently sitting around $180,5B level as it recovered slightly.

Looking on the global chart, we can see that the evaluation made its increase in an ascending channel made after a corrective three-wave decrease.

The support level was broken and the evaluation is currently retesting it from the downside for resistance at the moment, and if the resistance is there, I would be expecting the start of an immediate retracement. 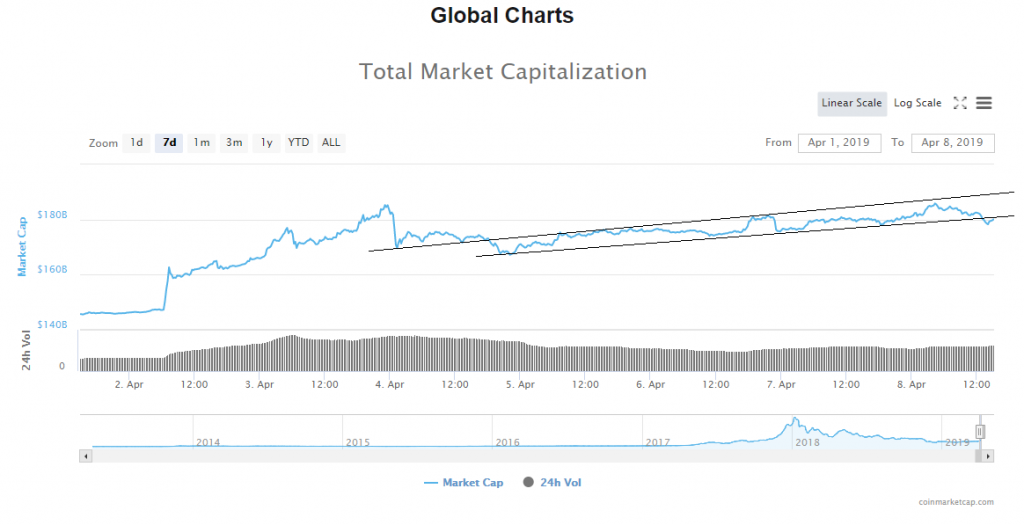 The market is mixed in color with an insignificant average percentage of change in the last 24 hours.

On Friday’s open the price of Bitcoin was sitting at around $4906. From there the price started increasing and came up by 8.68% measured to the highest point the price has been today which is at $5332.9.

Looking at the hourly chart you can see that the price of Bitcoin came above the presumed ascending channels resistance level and has retested it on today’s low as it bounced from it but hasn’t come up to the broken support of the minor ascending channel that was formed from Friday.

Since the price was below the 1.618 Fibonacci level an impulsive move was made past the upper resistance and the price continued its upward trajectory for another higher high after the interaction with the resistance of the ascending channel which served as support.

The higher high was made to the levels of the previous one made on 3rd of April and since then the price started impulsively moving to the downside.

This could mean that the 5th wave of the upward impulsive move has ended which would then implicate that now we could be seeing the start of the retracement. As the price of Bitcoin experienced an exponential increase last week the price has entered into its corrective stage from 3rd till 5th ending as a three-wave ABC.

As we have seen the completion of the three-wave correction followed by what appears to be another five-wave move in an ascending channel the five-wave move of a higher degree has most likely ended as a retest of the prior high.

We might see another increase if the 5th wave hasn’t ended but considering that the prior high was retested and the price found resistance there which it into a downward trajectory breaking out from the ascending channel in which the increase was made I believe that we have seen the end of the corrective upswing.

There is also a possibility that the minor ascending channel was corrective in nature and is a part of the same correction as the prior ABC. If this is true that the price is now headed for another correction to the downside which will be the 4th wave out of the higher degree five-wave movement to the upside and in that case, another increase would be expected past the prior high at $5339.

Bitcoin is in the buy zone.

The price of Bitcoin has experienced an 8.68% increase over the weekend but the price hasn’t exceeded the prior high level before the ascending structure in which it was increasing got broken to the downside.

This could be the first sign on weakness with the price potentially starting to move into further downside trajectory but as none of the minor support level’s wasn’t been broken this likelihood is still awaited.

As the increase, we have seen over the weekend is the 5th wave of a higher degree impulse, an increase above the prior high level could be likely as the price is to continue for another higher high from here before we see the expected move to the downside.

If we see another higher high I don’t believe that the price of Bitcoin would go higher than $5562-5756 which is the next horizontal resistance zone above.

The post Bitcoin Price Rises Over the Weekend, What’s Next for BTC? appeared first on Blockonomi.