Information is powerful. Arweave understands how important archiving information is, and the difficulties that can emerge for people that need access to reliable data that is stored online.

One of the biggest changes that the internet has engendered is an unprecedented amount of access to information.

Arweave launched a platform that addresses many of the issues that surround how information is stored online, and it also offers many new possibilities for developers who want to create decentralized platforms for moving data around securely. 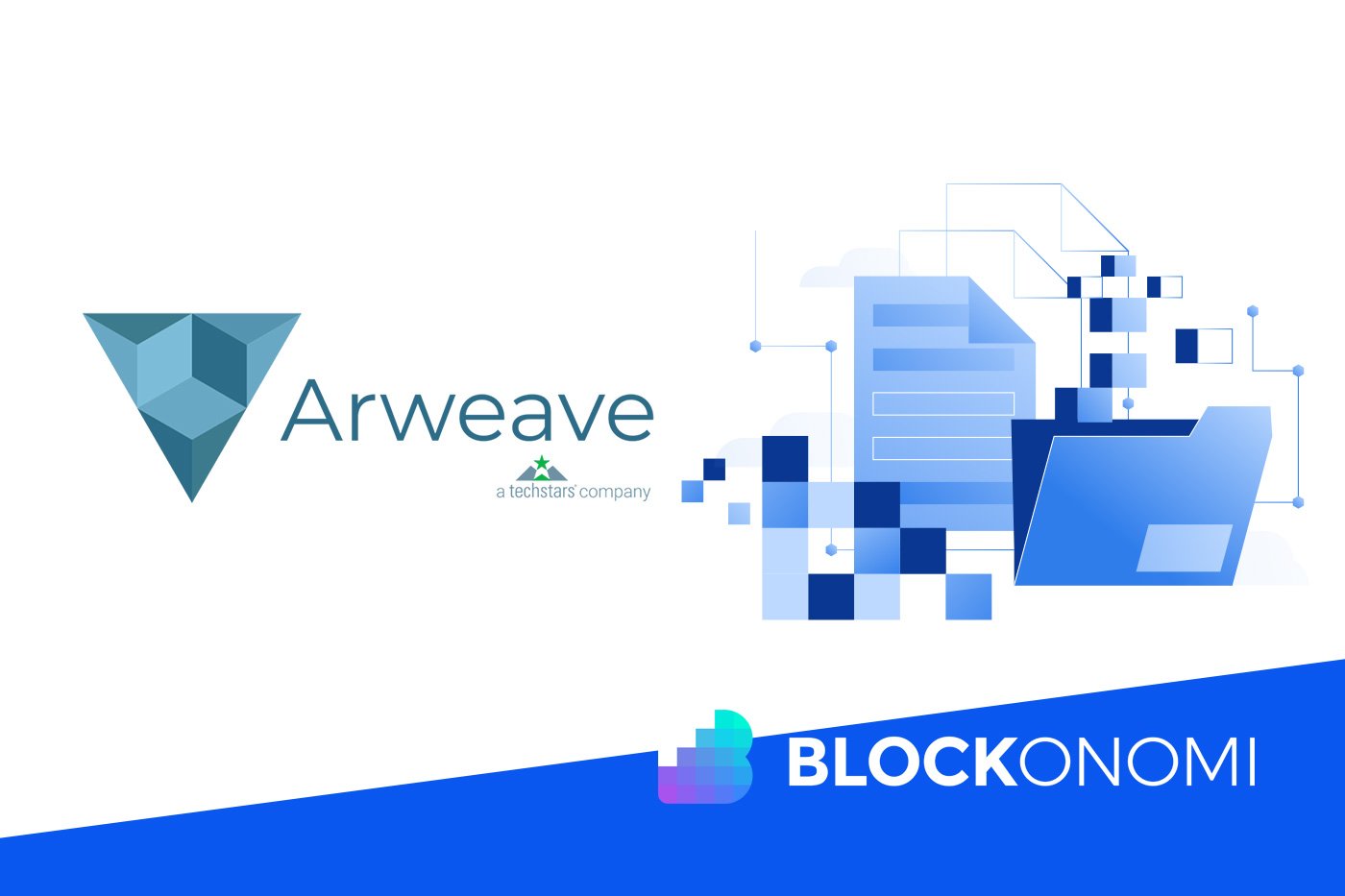 We like to think that once data is stored online, it will be freely accessible forever. In theory, this is possible, but in practice, it almost never happens. In fact, 90% of the links that were created in the 1990s are currently broken.

Let’s get this out of the way up-front. Arweave isn’t technically a blockchain-based platform. It uses a new idea called blockweaving to achieve a new level of data security, which also makes broken links nearly impossible.

“Typical blockchains have several major problems with data storage, requiring new third-party protocols to be built and integrated on top of the existing blockchains, as storage directly on the blockchain is infeasible due to exorbitant fees and very limited scaling. As the world’s ever-increasing demand for data storage capacity grows exponentially, the need for a decentralized, low-cost permanent data storage protocol that can scale easily and inexpensively is a necessity.

Arweave’s blockweave is a new DLT (distributed ledger technology) that enables decentralized, low-cost, permanent, on-chain data storage that scales easily and inexpensively. As the amount of data stored in the system increases, the amount of hashing needed for consensus decreases, thus reducing the cost of storing data, making it much cheaper than recurring fees from crypto- and traditional competitors.”

In plain English, this new blockweaving technology takes the existing relationship between data and storage price and inverts it. As Arweave’s network grows, it will actually become cheaper to store data. Additionally, it is impossible for Arweave (or anyone) to remove data, or even change its location once it is put on the chain. 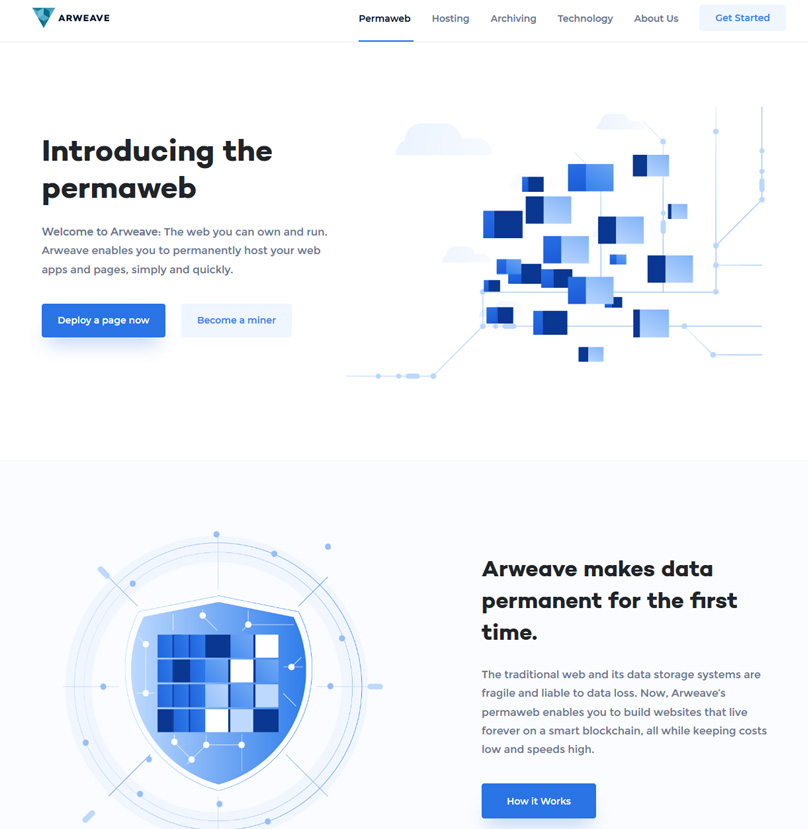 Blockweave is a new technology invented by Arweave, which differs from Blockchains by instead of generating blocks in a linear fashion, the blocks are “weaved” across the whole network using a “Proof of Access” consensus protocol. This helps to reduce miner’s costs and allows more on-chain storage in a verifiable manner which will allow up to 5,000 transactions per second (TPS).

The Power of Data

Novelist and social thinker George Orwell understood the power that information has in a society. In his novel ‘1984’ the protagonist worked at the Ministry of Truth. The job of the Ministry of Truth was to keep the public narrative in-line with the current goals of the government of the fictitious nation where the protagonist lives, which meant destroying lots of previous information forever.

The ‘memory hole’ was responsible for destroying all the inconvenient information in 1984. Today, we are facing a memory hole of our own in online data. There are two factors that are putting open access to reliable information at risk in the real world right now. Thankfully, Arweave addresses both of them.

The first risk is the active removal of information that governments and big companies don’t like. The recent example of Julian Assange shows us all how dangerous information has become.

Wikileaks has been able to keep its haul of previously-classified information online, but accessing it may put a person in legal jeopardy. It isn’t unreasonable to speculate that over time, hosting the kind of data that Wikileaks has could become criminal, as the US government is actively looking for ways to eliminate access to data that paints it in a bad light.

The second cause for inaccessible data is centralization. When a the web-side of a newspaper like the Washington Post decides to migrate their existing data to a new site, or it needs to reorganize its website, there is a big chance that older links will just be forgotten about.

Old data may not be erased (or it may) but it could be very hard to find. Lost links are a big reason why information becomes inaccessible, and there isn’t any practical way to ensure that major information providers make sure that their collections of data remain easy to find.

In mid-2018 Arweave raised more than $8 million USD via an ICO and has been able to launch a 1000-node strong network that is running the platform. The code that was developed by Arweave is fully open-source and has been worked on by numerous people who are outside the original development team.

The network already has over 4500 users to date.

Unlike many of the ICOs that raised money over the last two years, Arweave was able to launch its platform almost immateriality after closing its ICO. The platform has already been used to archive a wide range of data and appears to work reliably.

Sam Williams, who is the Co-founder & CEO of Arweave has a PhD in computer science from the University of Kent. He has been developing software since he was young. Williams has worked as a Technical advisor at Minespider, and a mentor in Techstars; a blockchain-focused startup accelerator program which operates in New York and Berlin.

Storing records using conventional data storage technology can be cumbersome. There are many legal records that need to be kept track of, but the move to digitization has been difficult. When a government or large organization goes over to a digital record keeping system, it generally organized as a centralized system, but this probably isn’t the safest way to store records.

Arweave created the PermaWeb. Instead of using private servers or the cloud to host data, large-scale record keeping may be better served by using blockweaving-based system, or just recording it on the PermaWeb, and becoming a node. 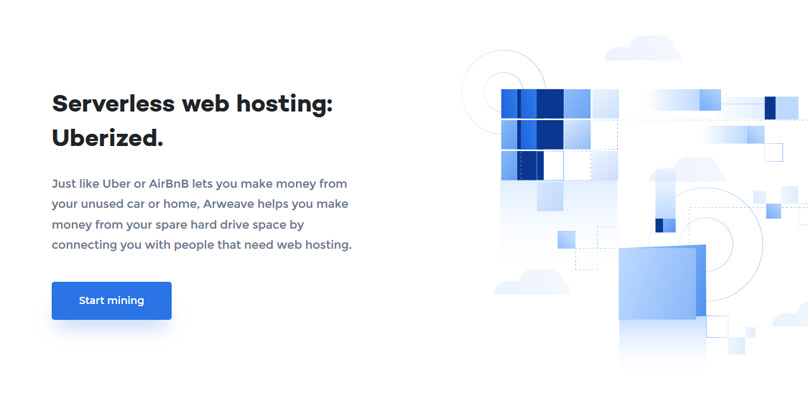 Blockweaving is both safer and more efficient at-scale, which is the opposite of existing systems. Additionally, governments and companies can leverage the PermaWeb to save money, as they don’t have to pay to run the entire system themselves.

The second reason to use blockweaving architecture is that it offers built-in redundancy. Normal data storage systems can potentially lose information if errors are made by admins, but this simply isn’t possible with Arweave’s architecture. While this system isn’t perfect for everything, it does make sense for numerous kinds of data.

The Risks of Centralized Data Storage

Humanity has a poor track record of keeping large amounts of data safe. While the risks of comprising sensitive data are clear (obvious risk of theft), we tend not to focus on how much data we have lost through mismanagement.

When data is stored on a centralized system, the likelihood of losing it via technical errors or mismanagement are high. In the world, before digital technology, this meant that books were often lost or destroyed, sometimes at scale.

Did you know the works of Plato are only available to us because they were hidden away in Eastern monasteries?

With the exception of the ‘Timaeus’, the corpus of Plato’s work was lost to the west for hundreds of years. The reason is simple: we are terrible at keeping track of valuable data.

In the world before digital, our only option was to make additional copies of data and then send them into far-flung places for safe keeping. Today, this simply isn’t the case. By using new database architecture like blockweaving, it is possible to make digital record-keeping systems that are difficult to destroy, and even more difficult to tamper with.

Arweave is More Than Database Architecture

If you want to learn more about Arweave, check out this great presentation by Sam Williams from Token 2049. Williams talks about all the cool stuff that Arweave is capable of, including using the open source code to create new kinds of online tools.

Williams outlines how he and a group of enthusiasts created a new encrypted email platform using Arweave over the course of a few hours. The messaging platform works off the same system that powers Arweave and allows users to send and receive messages that are totally private. The nodes that handle the transmission can’t see what they are moving, and tokens could be attached without any problem.

Open source technology gives us all a chance to participate in the next generation of technology, and avoid another ‘Microsoft scenario’ wherein a massive company controls the design and development of a global operating system.

The Time for New Ideas is Now

Despite the rush of new technology into the public sphere over the last few decades, the control has rested in the hands of a few major players. With the rise of decentralized technology like Bitcoin, the winds of change are blowing. Arweave is an example of an amazing idea that was possible to launch quickly, and could make a huge difference in how we store important data.